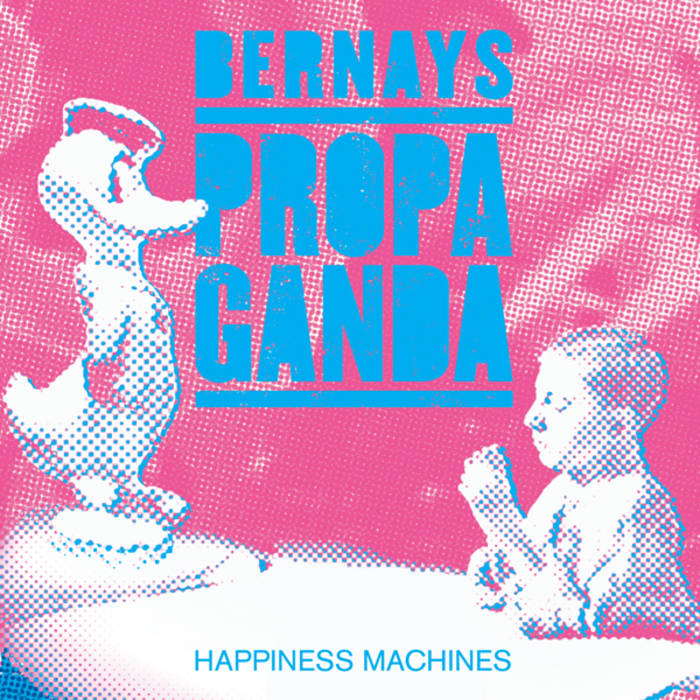 Luckily, the father of PR, Edward L. Bernays, is dead – otherwise, the United Nations Security Council,NATO, Mossad, Interpol, the Macedonian police, CNN and some other self-proclaimed leader, world's cop or sleazy politician would condemn Bernays Propaganda as enemies of humanity, dangerous anarchists, atheists, feminists and terrorists. However, the only crime of guitarist Vasko Atanasoski, drummer Dzano Kuc, bassist Sasa Pavlovic and singer Kristina Gorovska, is that they're protesting the consequences left behind by Sigmund Freud's nephew and one of the most influental Americans of the 20th century. Bernays invented the most powerful of all weapons which kills painlessly, purposely incites hate and secretly leads humanity towards destruction. Manipulation, control, and seduction of the masses disgust Bernays Propaganda, so they're inviting us to a politically engaged dance!

Vasko and Dzano played in the cult HC thrashers FxPxOx until last year, and all four of them were or still are active in many other bands (Suns, SmartXBomb, This Home Is Prepared, Demoncrats, Choice of My Own, Backstab Warning, Boombyx, New Police State, Treta smena). If the transition into a more optimistic, dancey and groovy ride is too much of a culture shock to someone, don't forget that the always positive long time punk core underground dance activist Vasko, among other activities, rollicks in the electro-dance PMG Collective, which captivated the Balkanian indie underground with their hit song 'Manekenki'. All of the above mentioned bands are here by chance as Bernays Propaganda are a symbolic combination of them all.

Their edgy lyrics subtly avoid Bernays' school instead of being hypocritical and agitprop-direct. A reverberant female voice enters deep inside the ear and spreads ideas together with the music. The social engagement iz well-founded and positive. Dance and politics. Music and attitude. Fun and struggle. Collectivism and individualism. Bernays Propaganda praise the postulates and attributes which many post punk and new wave revivalists have forgotten. With their best intentions they mantain the ideas and attitudes of a long line of bands such as Gang Of Four, Slits, Fugazi, Submission Hold, !!!, Gossip, LCD Soundsystem... Their danceable fpunk doesn't try to escape reality, but also refuses to accept status quo. Bernays Propaganda don't want escapist entertainment – they're utopistically but honestly fighting for a better world.

After a self-released EP and contributions to compilations from Skopje to Moscow, the persuasiveness, self-confidence and positivity of Bernays Propaganda shook the ground beneath Mr. Moonlee's feet. He just couldn't resist temptation, so he made room among his crew and accepted another debutant – no less than the debutant of the year 2009., which hails from the the banana republic of Macedonia. Bernays Propaganda entered Enterprise studio soon after that and, with the help of Valentino Skenderovski, recorded their long-anticipated debut album (mastered by Carl Saff) named ''Happiness Machines'', which will be out on Moonlee Records in April 2009. The album will also feature a 32-page essay on violence and the human society, written by singer Kristina..

Dance, clap, sing and celebrate civil disobedience, human rights and freedom! Spread the word that the socio-politically motivated crew called Bernays Propaganda have prepared an album you won't be able not to dance to! And while you're at it, don't forget to use your head!

Recorded, mixed and produced by Valentino Skenderovski in Enterprise studio (October/November 2008)
Recording live assistant: Nenad Trifunovski
Mastered by Carl Saff
All words written by Kristina Gorovska
(Except "Kill me!" , written by Vasko Atanasoski)
All music written by Vasko Atanasoski
Arranged and played by Bernays Propaganda
Artwork and layout by Darko Kujundzic
Feel free to write us at: bpropaganda@freemail.com.mk